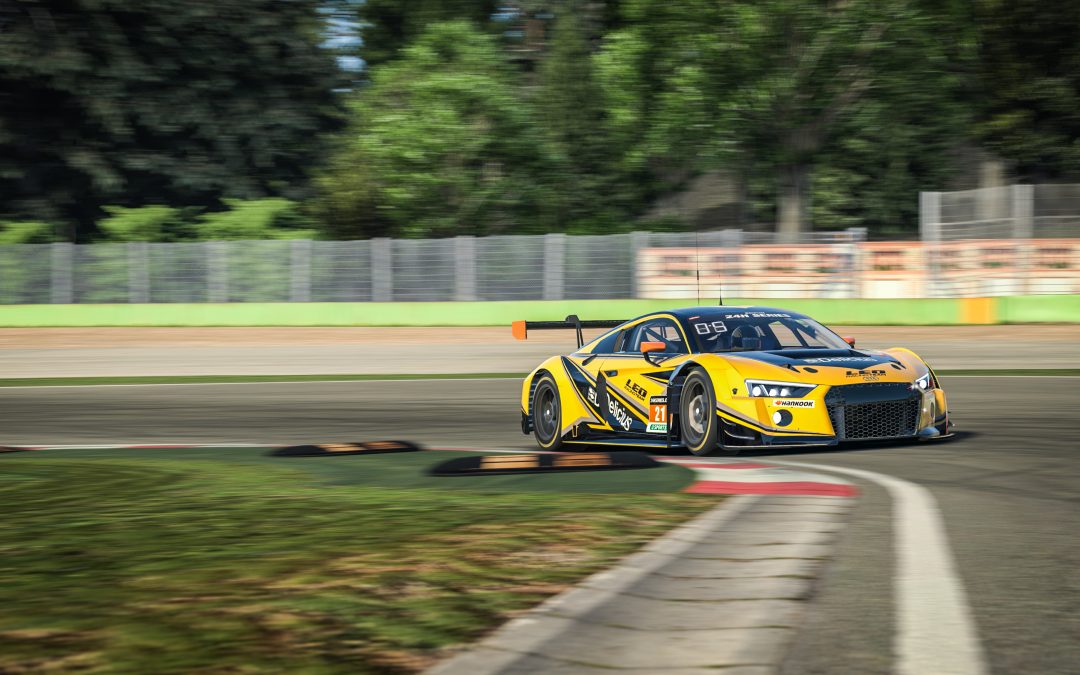 After a very close prequalifying held around Donington Park in September, the 56 elite teams who made the cut can finally get the 24H Series eSport by VCO online racing season underway.

Prior to qualifying two teams where handed penalties by the series organisers, No.401 E-Game Racing (GT4) and No.136 Team MAD (TCR) both received 60 second time penalty’s that they would be required to serve within 90 minutes of the start of the race.

The penalty was awarded to the teams was for incorrect registration when joining the lobby session, both were found to be running incorrect race number and instantly handed the penalty for breach of the series regulations. With only a 15-minute time slot available to each of the teams across all four classes, the official split the field into individual categories in order to be fair to those taking part.

Setting a perfect lap would prove to be a tough ask, with many choosing to put an early fast lap in then save tyres looking for a more open track before pushing once again for a second attempt late on. 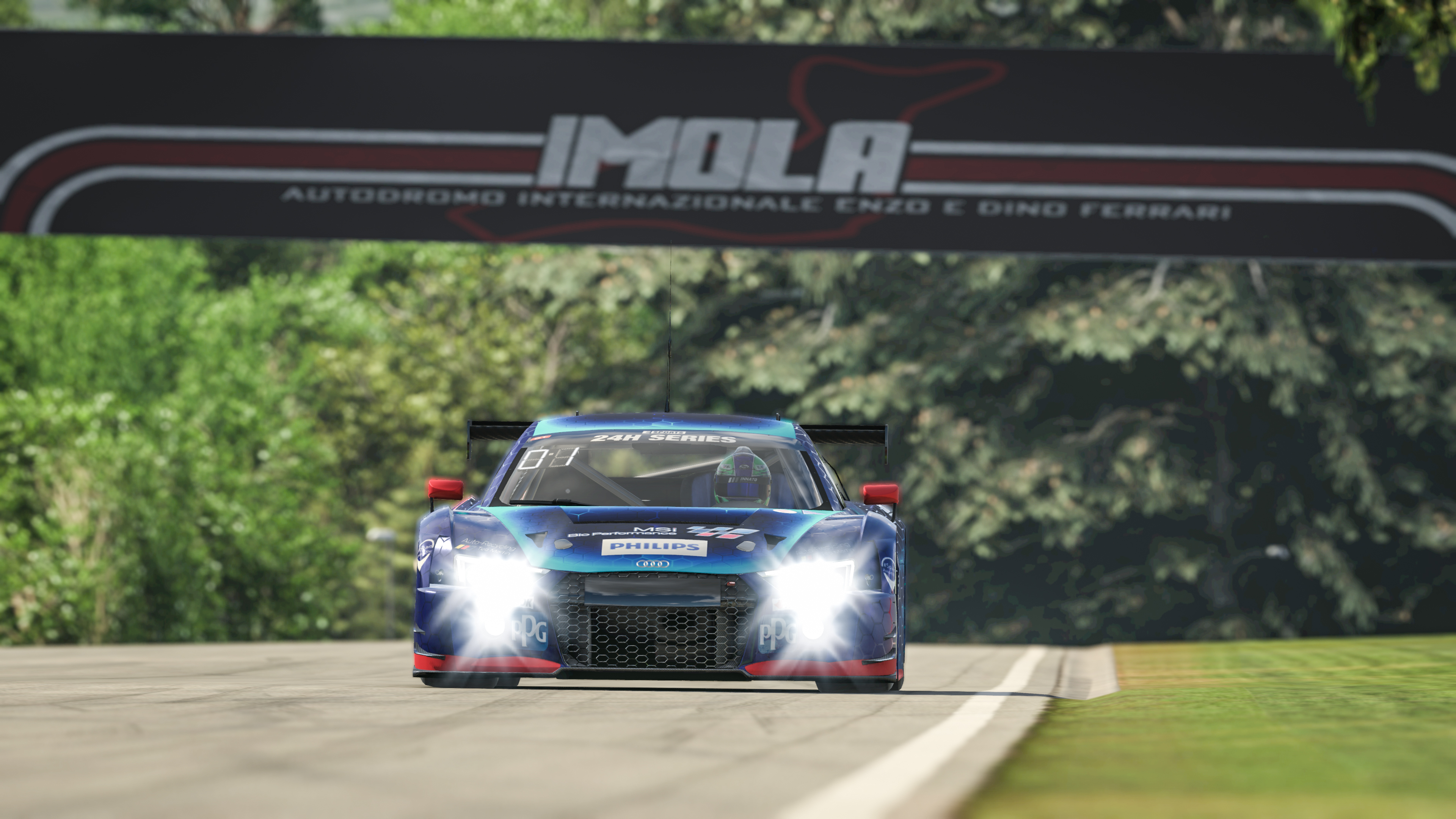 At the front of GT3, Alejandro Sanchez lapped the No.44 MSI Esports Blue too Pole position with a 1:41.067, just one tenth ahead of Dino Lombardi 1:41.202 in the No.12 Leo Racing Team 12. Dino was only just down on Alejandro but could not find the extra to snatch Pole from him at the end.

The Jorn Zoetekouw from the Netherlands, qualifying third with a 1:41.552 in the No.98 Red Camel Esports. Racim Fezoui pushed hard in the No.77 Racekraft Esports to set a time of 1:41.572, while Arthur Lehouck could not find the correct rhythm on track to deliver the best lap for the No.1 Williams Esports Chillblast 1:41.573.

Arthur Lehouck, No.1 Williams Esports Chillblast: “Personally I had a bad qualifying session and was not able to pull the most out of my lap that I wanted to, we had to start P5 and look at working our way back up”

Incredibly Fezoui and Lehouck, provided the closest margin of any of the GT3 teams at just one thousandth of a second 0.001 separating the pair. 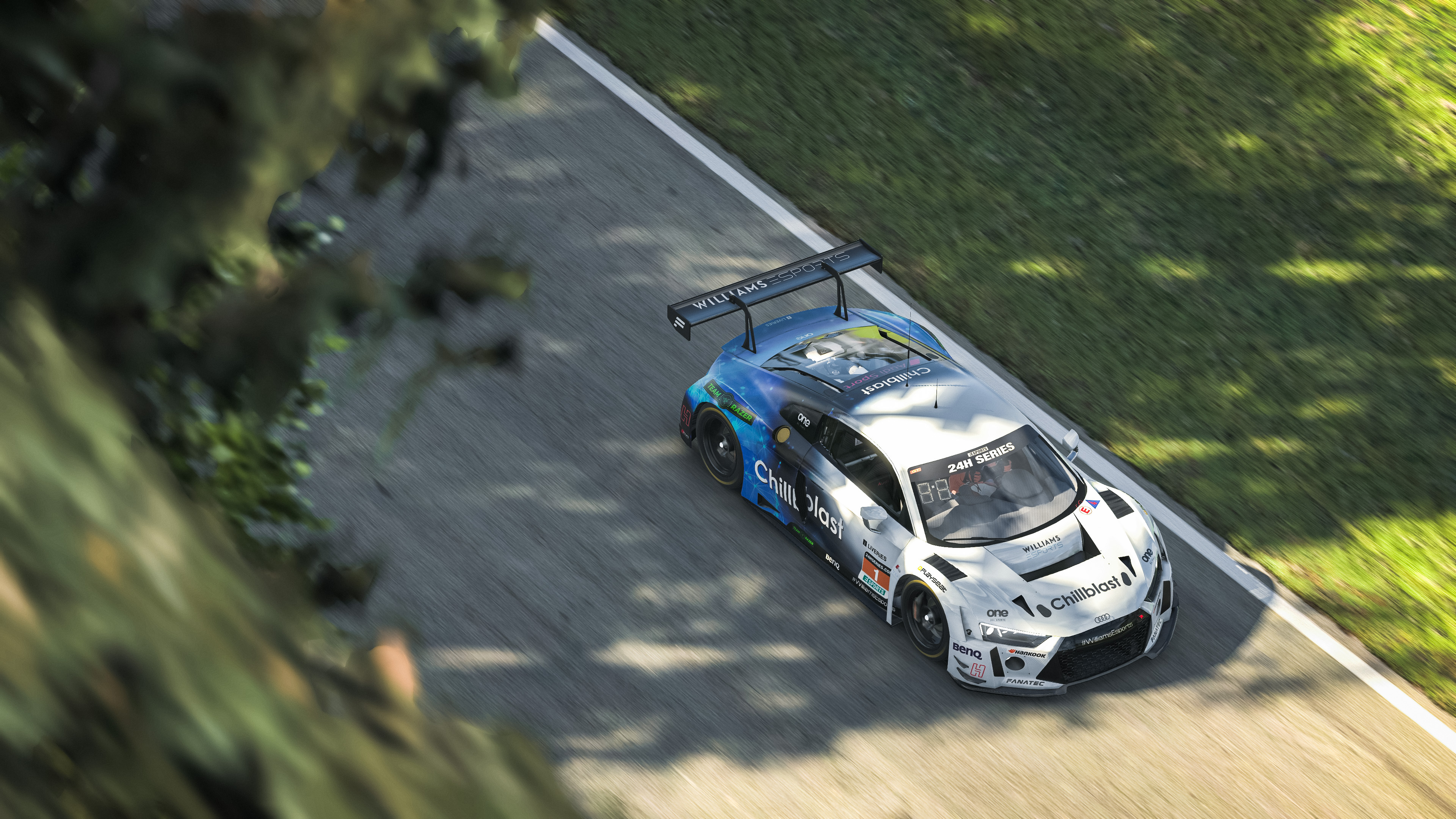 Anyone watching may have thought that GT3 qualifying had turned out to be an otherwise all Ingolstadt affair, they would not be too far wrong. The top six had all been driving the Audi R8 LMS, only Filip Mitrevski in the No.78 Ronin SimSport Mercedes AMG GT3 managed to make the top ten, qualifying in seventh with a 1:41.664, breaking up the domination of the Auto Union.

Filip Mitrevski, Team Manager, Ronin Sim Sport: “Our qualifying effort was below what we had hoped for, so that put us mid pack where the traffic can make or break a race. Sometimes you get lucky, sometimes you get them in places where you have to concede time. Its all part of endurance sim racing” 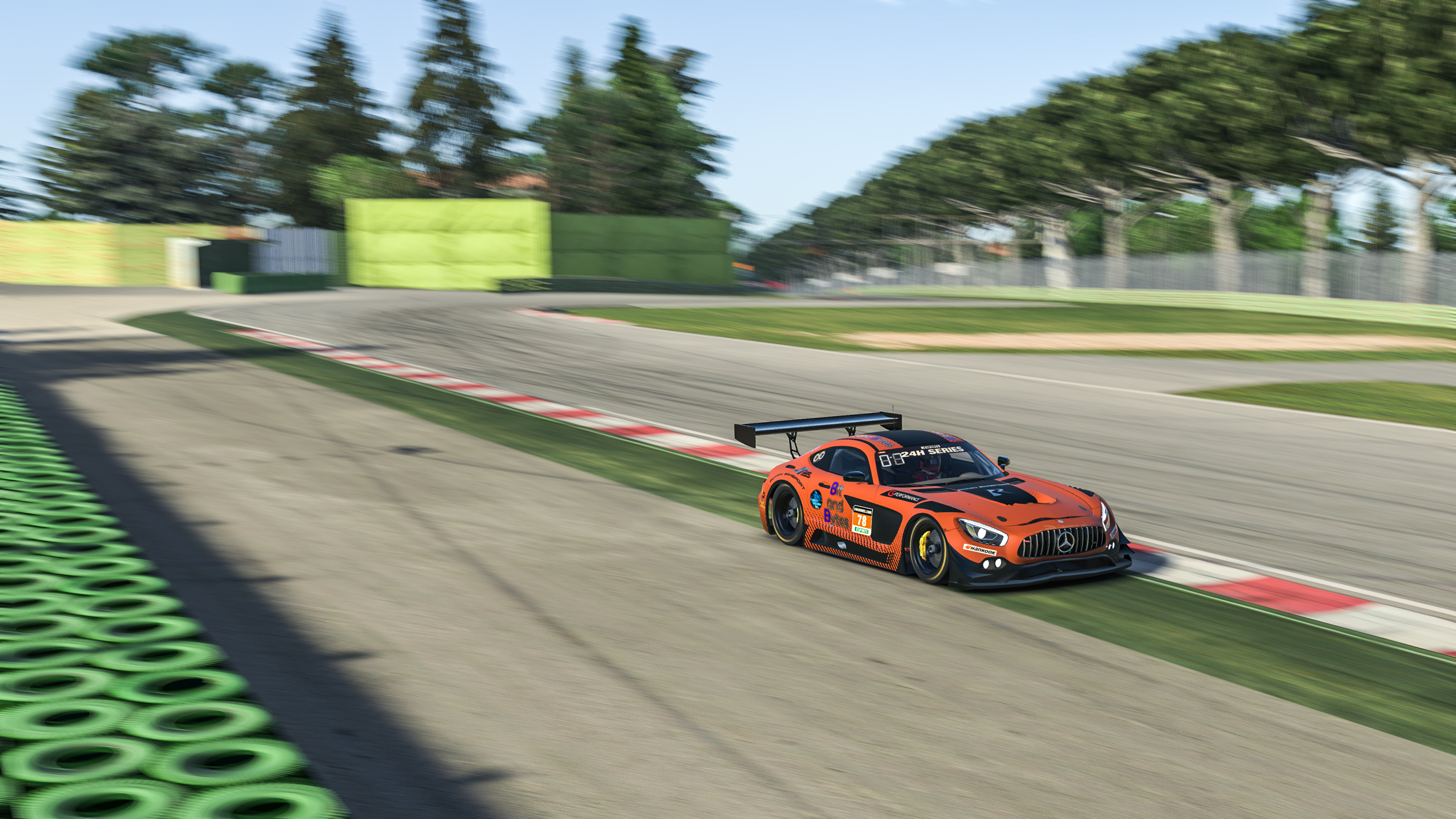 The 991-Cup class is supported by the latest generation of the Porsche 911 GT3 Cup, considered by many to be the most equal playing field of all the classes that make up the 24H Series eSport by VCO. Lasse Bak put the No. 936 Williams ESport BenQ on Pole setting a 1:43.602, just two one-hundredths of a second ahead of Anders Dahl in the No.911 Burst ESport 1:43.620.

Andres Dahl, No.911 Burst Esports: “Qualifying was very close amongst the top three, I felt like we had the pace and should have got pole!”

It had looked like Inertia Sim Racing would be on the front row with their lap of 1:43.681 prior to Anders Dahl impressive final lap. This put Matias Vitakainen No.902 Inertia SimRacing EuroRC.com, alongside the team’s sister car No.900 Inertia SimRacing Imprimo.fi driven by Dani Korpi, creating an all Finish second row.

Robin Ostlund posted a 1:44:163 to give No.907 GoTeam Racing fifth, one tenth clear of Rafal Drzaszcz No.979 GTL-VRT RED 1:44.216, all Polish team hoping for a clean fair race. Johnny Brandon in the No.919 XVR Sim Racing Porsche had struggled with pace in qualifying choosing to concentrate on the team’s race setup and strategy. 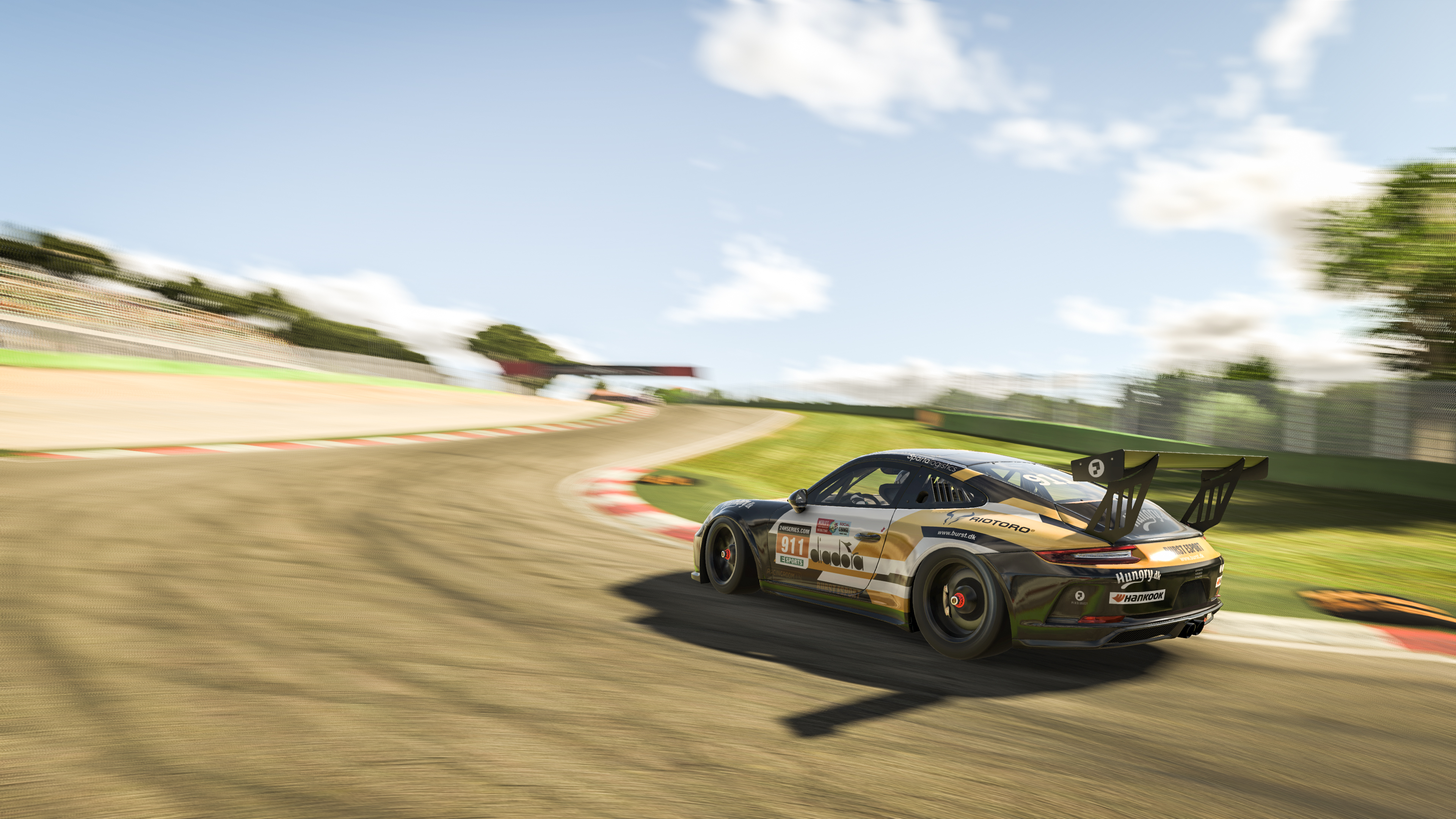 Emanuele Petri grabbed the GT4 class pole right from underneath them with a 1:50.791, handing the No. 446 SRS Squadra Corse White BMW M4 GT4 the top spot by nine hundredths of a second. Matt Turnball in the No.416 Puresims Esports had been looking strong throughout qualifying putting the teams Porsche Cayman GT4 regularly on top, but his effort of 1:50.887 would not deprive SRC Squadra Corse Pole position in GT4.

Paolo Toppi took the N0.417 SRC Squadra Corse Black No.417 to third, fractionally ahead of ahead Nils Koch in the No.489 BS+Competition.

Germany’s BS+Competition team is supported by BMW Motorsport and are expected to be regular front runners for the coming season.

Despite the BMW M4 GT4 being down on overall performance from the 24H Series eSport by VCO BoP, it had enough in hand to successfully take four of the top six spots overall in GT4. 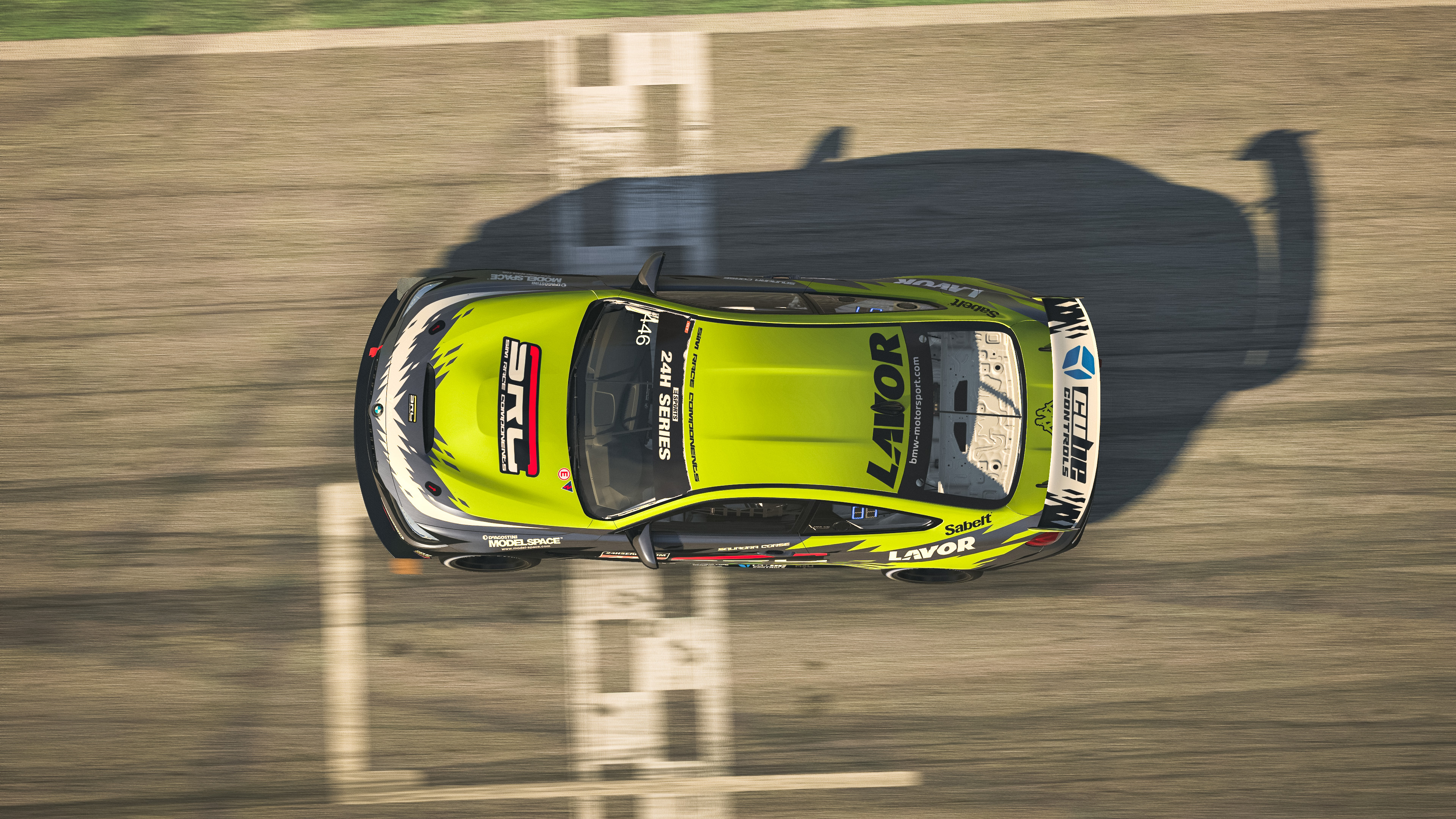 Alessandro Bacchilega dominated TCR posting a 1:53.673 put No.113 SRC Squadra Corsa TCR on pole. This proved to be more than enough to give SCR Squadra Corse a double celebration outqualify Ross Macfarlane in the No.116 Puresims Esports 1:53.901, a full two tenths faster than the Puresims Audi TCR.

The Jurgen Frank narrowly missed out on second for the No.176 of SIMRC, a 1:53.961 put the German team third, while Corentin Guinez gave the No.159 HM Engineering forth 1:53.77, just out of reach of the front row but still close enough to be able to be counted as serious contenders for the race. 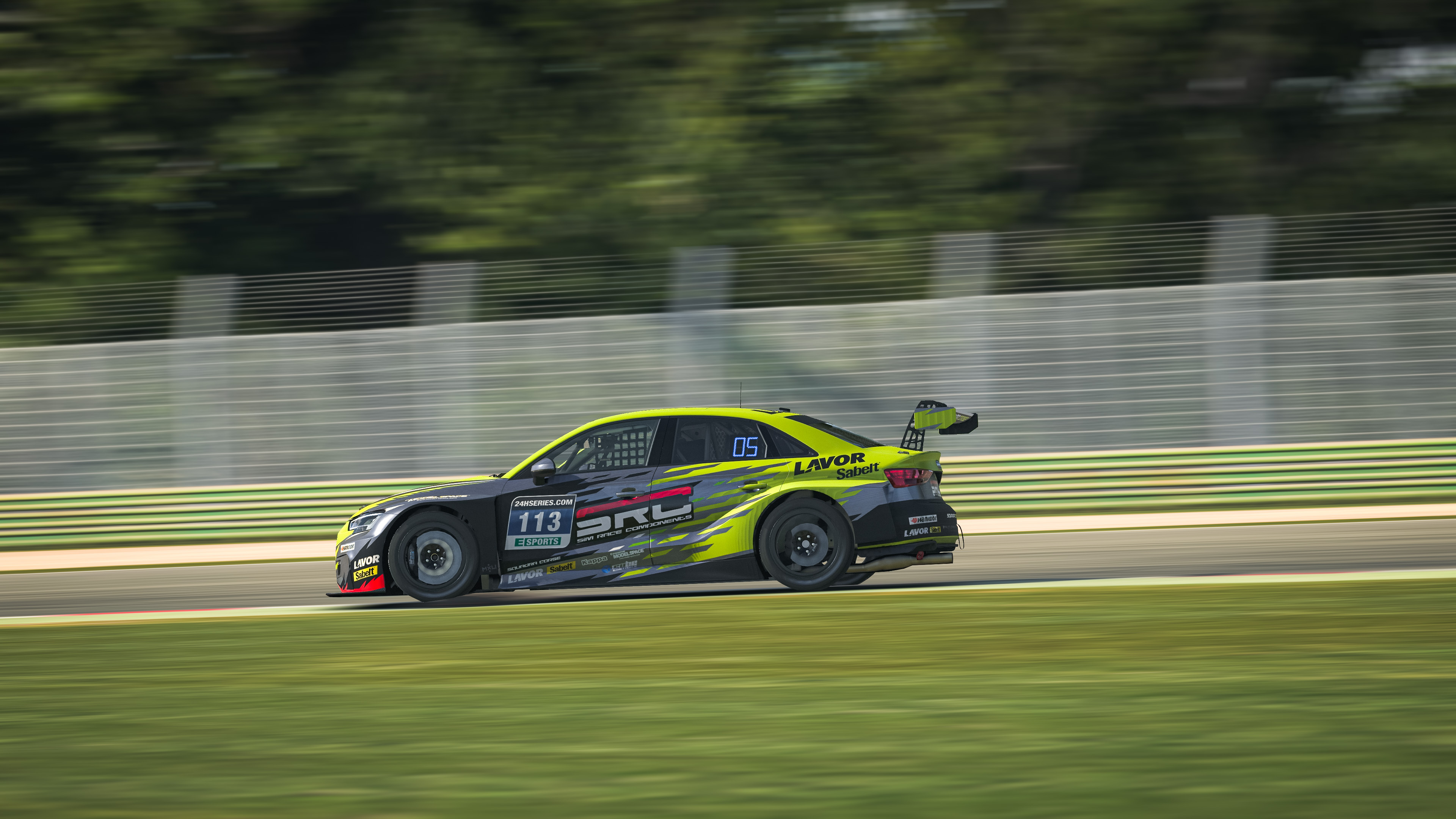