If proof was ever needed that a bit of luck can produce a shock result, then Henry Ayres rise to victory in the 177 Rotax Masters is just that.

The 177 Rotax Masters is one of the best contested senior Kart categories in the UK, contested by drivers 16 years and up many of which have had experience competing in the Senior Rotax ranks of the sport in a race that witnessed a host of lead changes with many of the top drivers all falling foul to various mechanical issues throughout the day, few could argue that the significant number of retirements could not take anything away from the superb job that Henry Ayres did.

Making his way through each of the heats to make the final was an achievement in itself, while chasing each of his competitors hard. Ayres picked his moments and avoided the carnage going on all around him, if ever there was a underdog performance this was surely it.

The opening heat of the day would see a regular competitor at Clay Pigeon Raceway Sam Winter take the opening pole of the day, Derek Hunt was set to line up alongside Winter, unfortunately Hunt encountered technical issues with his Kart and was unable to make start. This promoted Oliver Appleby to second ahead of the start of the race.

When the lights went green, Oliver Appleby made short work of Winter passing the Pole sitter on the run down the Main Straight on the second lap, a better exit off Top Bend coupled with his superior exit speed allowed Appleby the opportunity he needed to pass Winter with a great late breaking move up the inside into Billy’s Blind for the lead.

Cole Edwards made an equally fantastic start, moving up from ninth place to seventh in the opening moments of the race. Edwards progress did not stop their, moving up to forth impressively making up five places on the opening lap alone. This in turn put real pressure on Darren Rich who had moved up to third at the expense of the unlucky Hunt.

With each of the the race heats only lasting seven minutes chances would be few, Edwards then made a pass for third on Rich opening the door for Ian Branfield and Liam Rabjohns to move up. The canny Edwards then made his move on Winter pulling out from behind him along Sturmey Straight, the pass was well played out waiting for the best moment to pass Winter down the inside into Hann’s Hairpin to take second. The move had forced Winter to run wide allowing Branfield through at Button’s.

Appleby never put a wheel wrong, pulling clear of the chasing field to take the opening heat of the day, Edwards progress had been astonishing rising from the mid field to take second while Ian Branfield followed home in third.

As the 177 Rotax & Masters field headed out onto the track for the second heat of the day controversy struck, Dan Milner came together with Andy Williams on the parade lap, the resulting multitude of chaos would see an unfortunate Paul Horton retire from the second heat before it had begun with damage, Miller and Williams also joining him on the side lines giving each of them plenty of time to work out what had occurred.

With the incident cleared up, Joe Pfiffner took up the Pole with Henry Ayres lining up alongside with heat one star Edwards in third.

Once the racing got underway Ayres took no time at all to move into the lead followed quickly by Chris Thomas who passed Pfiffner with relative ease allowing Edwards to follow through.

Edwards now made quick work of Thomas with a near perfect copy of Appleby’s move along the Main Strait from the first heat, despite dropping down to third Thomas kept his cool matching the front two for lap times all the way to the finish.

Ayres was now pulling away with relative ease keeping ahead of him for long periods of the lap, Edwards was also matching the race leader for sector times while looking for any moment in which to make his move.

Having missed out on the first heat win Edwards would not be denied a second time, seeing how Ayres was struggling exiting the Horseshoe Edwards made his move, setting up the race leader perfectly along Sturmey Straight to make the pass into the Hourseshoe, the move allowed Edwards thought and able to pull a slight advantage out on Ayres, securing the much sort after heat win in the process.

The third and final heat of the day would see two familiar names for Clay Pigeon Kart Club, Ayrton Anderson and thirty-five-year-old Aaron Yeo would take to the front row of the grid, unfortunately Charlie Whaley became the second driver of the day not to start a heat due to mechanical difficulties.

Yeo held on to second but it would be Phillip Haworth who would take hold of the early race lead, Anderson had a poor start leaving the door wide open for Hayworth too pass with a well-judged move alongside him into Billy’s Blind. With Anderson and Colin Davis now both falling down the order, Ian Branfield became the biggest winner from the start moving from ninth to forth.

Haworth was now in a position to pull clear from the field looked in control and on the way to victory, Yeo on the other hand had other ideas maintaining second. The thirty five year old ‘Master’ applied continuous pressure to the leader with Haworth seeming to be absorbing all the pressure that Yeo could provide, however on the penultimate lap that all changed.

As Haworth exited Hans Hairpin something detached itself from his Kart, moments later it was evident something was seriously wrong with the race leader with obviouse issues and the stewards now issuing warning flags, Haworth pulled over and retired.

Yeo was instantly promoted to the lead with Davis having recovered to third found himself now up to second with Branfield’s impressive driving seeing him up to third.

Aaron had held his nerve maintained a consistent pace and shown why experience can pay off, as he crossed the line it did not matter who else was around, he looked overjoyed at having held onto take the final heat win.

Ayrton Anderson #25: “I was pleased to be starting on Pole and looking good forward to heat three, after the pace I had shown in the previous race’s.”

“Unfortunately a bad start dropped me to sixth position during the opening lap and I had to work hard to return to the front eventually finishing fifth, given what happened a top three was possible.” 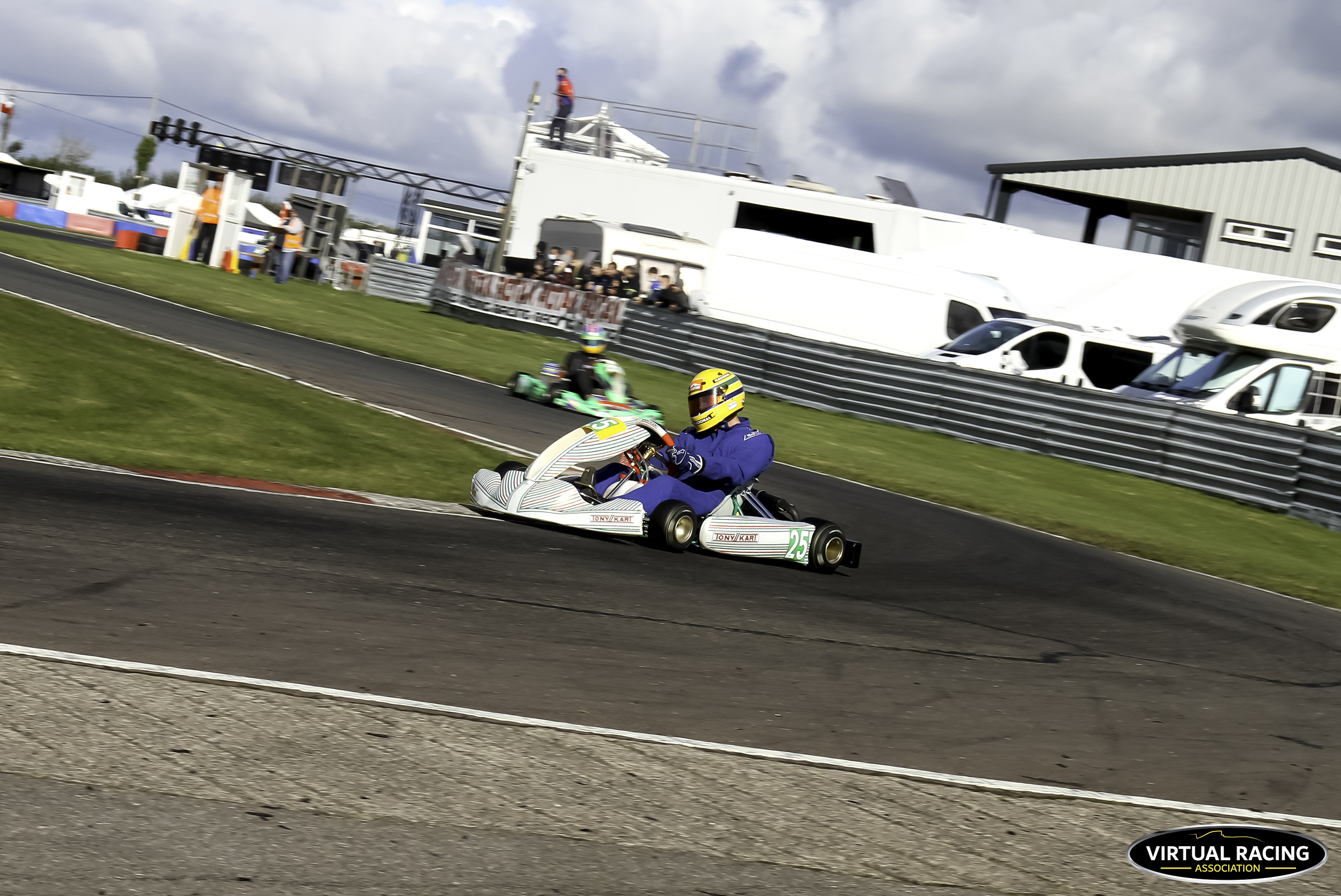 Cole Edwards along with Oliver Appleby, Philip Haworth, Ian Branfield had been the drivers to beat, all day they had been putting in the performances needed to set them up as the favourite for the 177 Rotax & Masters ‘O’ plate final. The heats had provided a tantalising glimpse at what was to come, Edwards strong performances in the heats meant he lined up on Pole and as the ‘E’ plate holder it was only natural that he was seen as the main contenders for the title.

As the field made its way round the tension grew, would everyone make it through the first corner safely who would take a shot at the win early on and could their be a shock in the making.

Edwards held the lead while a poor start from Ian Barnfield dropped him down the order to forth, Appleby started well moving up to second and instantly pressuring the race leader. It would be a few laps before the pressure of leading became too much and Edwards made a rare mistake, leaving the door open through Bill’s Blind Appleby made the pass only to then be repassed moments later with a well worked back pass by Edwards onto Sturmey Straight catching Appleby by surprise.

Hayworth had now passed Ayres for fifth having started ninth, Ayres had stayed clear of the front four watching the action unfold but had failed to pay attention to the charging Hayworth.

Edwards now seemed to be holding everyone up and despite holding a narrow lead from Appleby the pair were at the front of an ever-growing train of Karts, with Haworth making up more ground with a pass on Thomas then Branfield putting him into serious contention.

It was at this point that Appleby made a move for the lead, unfortunately for Edwards an eager Thomas decided to give it a look up the inside, the result was a four wide tussle into Billy’s Blind, Edwards was forced to take to the grass and Thomas was spun out into the outside wall. The resulting chaos dropped both of them out of the race for the title and left a serious question as to who was at fault for the stewards to investigate. 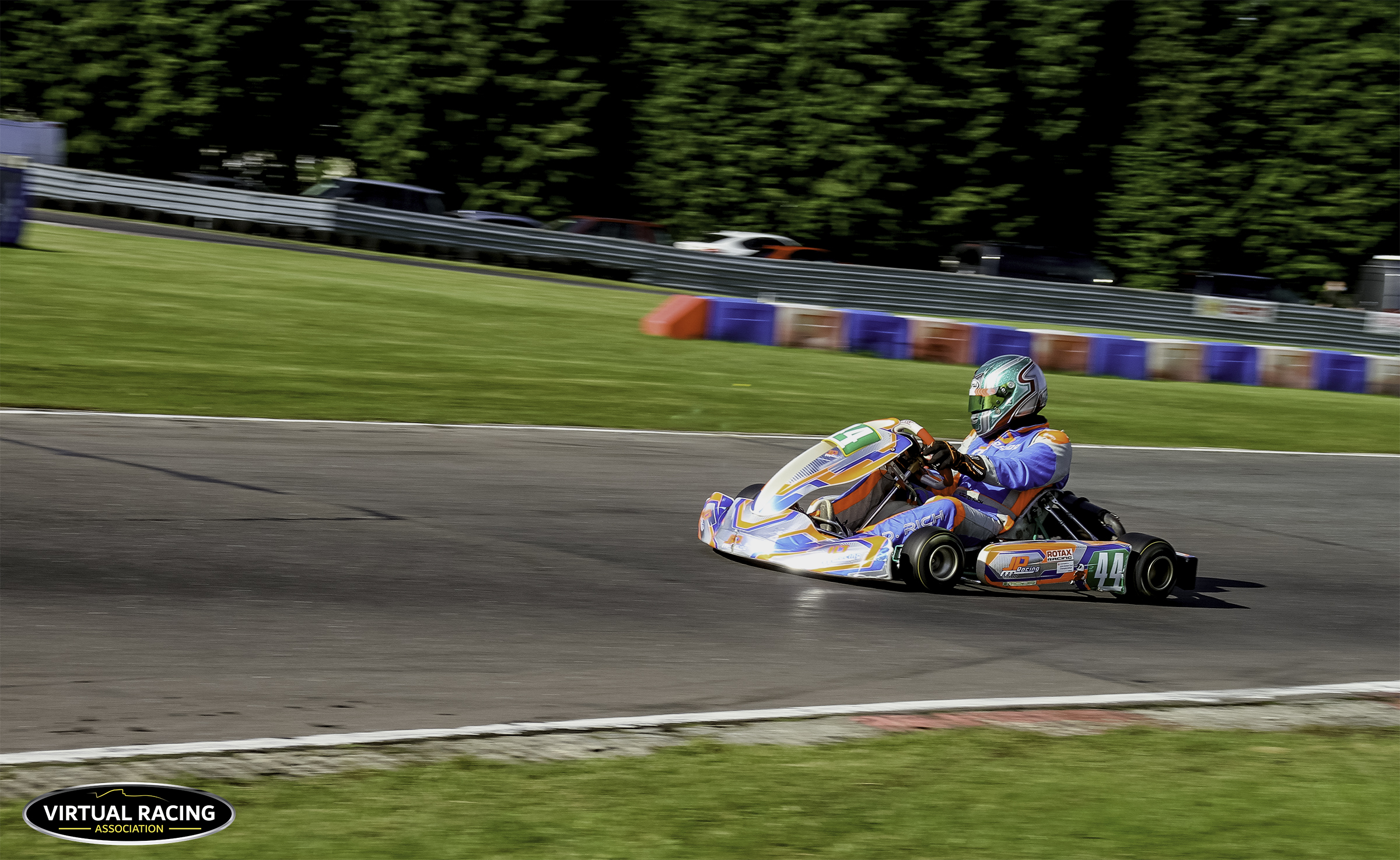 Incredibly Appleby, Haworth and Branfield had survived the carnage, with Haworth and Appleby continuing to swap places over the next few laps.

With just five laps to go anyone of five karts could and deservedly did have a chance to win, Haworth now looked the driver most likely to go for a move. A late on the breaks lunged for the lead on Appleby going into Billy’s Blind was less than impressive, going over the top of Appleby with both drivers being forced to retire from the race.

A surprised Branfield now found himself in the lead with just a few laps to go, Ayres now in second was catching the new race leader and looking very much for a way pass. As the pair approached Hans Hairpin on the penultimate lap Ayres caught Branfield off guard made the pass and then set off on the last lap.

Ayres now had the lead and with Branfield all over the back of him moving left to right for any possibility to retake the place back, Ayres however held firm keeping his Kart in the right place’s at the right moments. Throughout it all Ayres had driven calmly and flawlessly to earn a well deserved victory, With others looking to dominate around him, Ayres used impeccable track skills and won the race simply by virtue of running each and every lap cleanly and perfectly, a true underdog performance from the start.

Post Race, Henry Ayers #28: “It was quite a calm race from us starting fifth, it got a bit hectic towards the end but I picked my way through it all and won in the end”

“Its really important, to keep cool otherwise your going to make loads of mistakes and that will cost you so much time and the race so keeping my head cool is one of the most important things I could do”