Douglas beats Crowther as Phull crashes out at the start

Harrison Crowther, Blake Ticehurst, and Chase Fernandez were left to think of what could have been as Andrew Douglass showed his pace to take the Mini Max opening round victory win for Coles Racing.

While Blake Ticehurst starts the season on top in the championship marks a massive step towards the 2021 Clay Kart Club Championship, the Honda Cadet Ultimate Karting Champion relished his return to Clay Pigeon.

The opening Heat of the day provided the first real insight into what was to come, Harrison Crowther jumped early leader Scott Marsh on lap 4, quickly pulling out a gap of two tenths gap over Marsh on his way to the opening win of the day.

Once out in front the attention switched to Blake Ticehurst who moved ahead of Marsh with four laps to go breaking the outright Clay Pigeon Raceway lap record for Mini Max on his way to 2nd, Crowther’s pace dropped of in the latter stages allowing Ticehurst to close up to within one tenth, but he was unable to take advantage over the last lap giving Crowther the win.

Andrew Douglass claimed a dominant victory in the second heat of the Clay Pigeon Kart Club season opener over Arun Phull. With Phull having stormed through the early on field to take up 2nd behind Douglass, the two drivers quickly pulling away from the rest of the field stretching out an advantage of 1.9s over the Xcel Motorsport kart of Charels Green.

Douglass and Phull engaged in a tight scrap for the victory early on the gap remaining within half a second with Phull continuously pressuring Douglass for the lead. From lap 8 onwards Phull pace began to drop off and he fell into the clutches of Adam Wooden who had sensationally made quick work of Charles Green having started fifth, with the trio running nose-to-tail for the final laps unable to challenge Douglass for the victory.

Chase Fernandez converted Pole into a dominated victory in the third heat as the chaos ensued behind him. In total five drivers all suffered issues following the start through Billy’s Blind, Amelie Acketts, Hugh Moulton, and Freddie Wherlock where among the biggest loser’s all dropping to the back of the field having been at the front.

Reg Heywood briefly held onto second following Kieran Roberts demise on lap 2 before eventually dropping to sixth at the finish being passed by Harrison Crowther in the process who was on a charge from 21st on the grid to 2nd at the finish. Arun Phull put in another top performance to come from 14th to 3rd setting up an interesting Mini Max final between himself, Crowther, Ticehurst, Fernandez, Douglass and Wooden.

After the preceding heats Harrison Crowther and Arun Phull both started the Final on the front row with every chance of being crowned the winner. It was especially heart breaking for Phull Xcel Motorsport whose championship hopes looked to have taken a twist just one event into the season, being an innocent victim at the start when pushed wide onto the grass by Chase Fernandez dropping to sixth.

Andrew Douglass jumping past Phull to move into third behind Ticehurst with Crowther maintaining the lead. Behind them Ewan Charman fought it out with Charles Green to move in to forth with Scott Marsh maintaining eighth, Douglass then used the run of Billy’s Blind to power past Ticehurst for second. 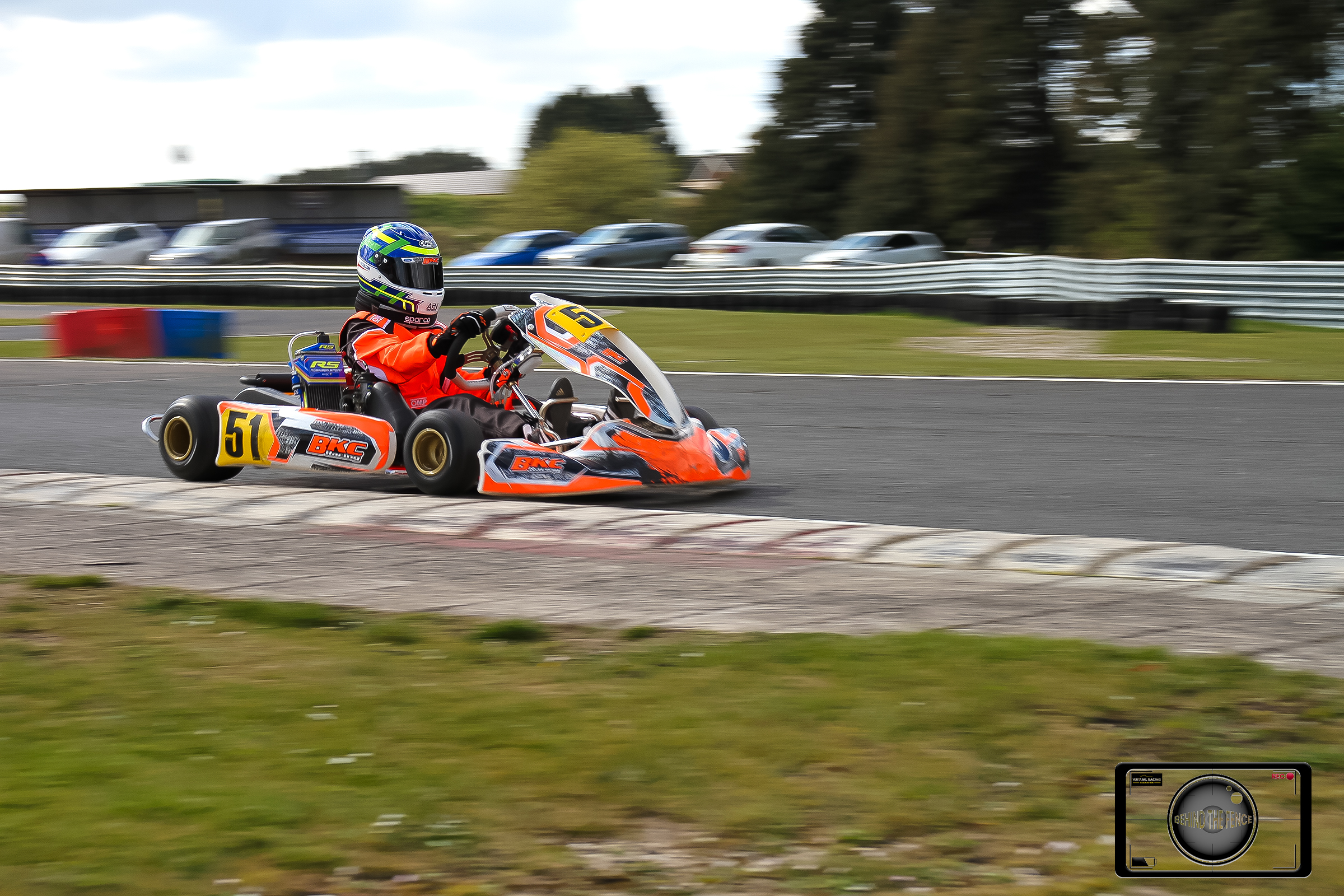 Marsh quickly dispatched of Adam Wooden under breaking for Hann’s Hairpin for seventh, before Green went off track allowing Phull past. Marsh took full advantage of this to pass both but in doing so gained an unfair advantage by running Phull wide blocking Green’s recovery in the process.

Further back Thomas Bearman and Reg Heywood were making steady progress moving up in the early laps. Wooden now began piling the pressure on the recovering Phull, immediately putting him under attack – Phull managing to fend him off. But a mistake from Phull gave Wooden the run he needed to pass him on the exit of The Horseshoe, the following lap Phull re passed him with an aggressive late breaking pass into Billy’s Blind with Wooden unable to respond.

At the front Crowther was powerless to stop Douglass from coming passed into the lead at Billy’s Blind, by lap 10 Marsh was past for second and it looked like the Coles Racing driver was beginning to fade away dropping further down the order as Ticehurst found his way past on lap 13. 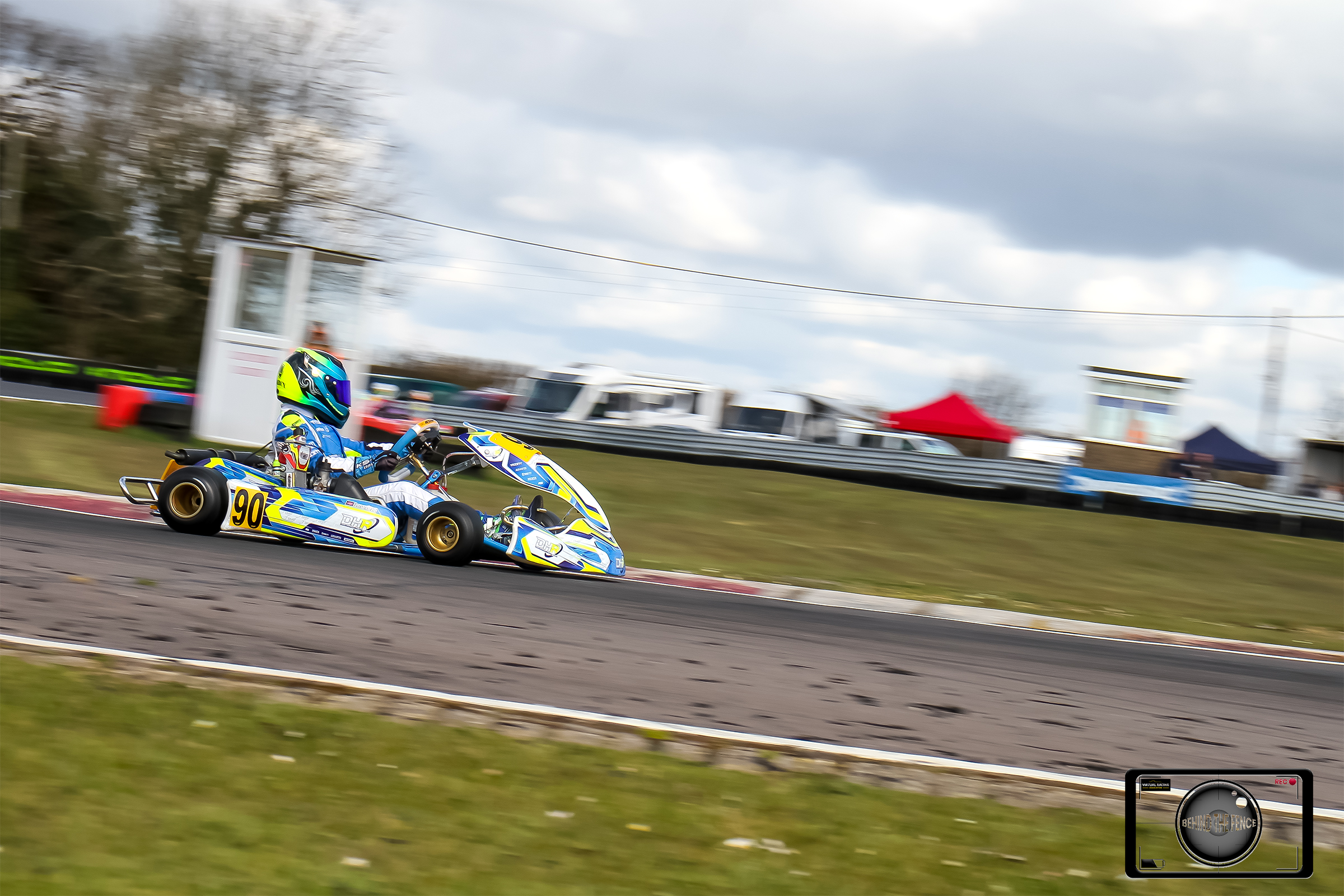 After stalking Douglass for several laps Marsh made his move for the lead with a late pass down the inside of Hann’s Hairpin, Douglass immediately tried to respond by hanging on around the outside of The Horseshoe only to be forced off track by Marsh.

Crowther and Ticehurst were part of a frantic battle for the final podium place. They traded places twice in the final laps, Ticehurst seemingly let Crowther past with a lap to go allowing him to have a crack at the cars in the front. Ticehurst had done a spectacular job to get up to speed and battled hard to finish, he raised his pace but would be unable to re pass Crowther.

Marsh cruised to the win once passing Douglass, crossing the finish line with a lead of just under two seconds for the win – until stewards decided that his robust driving had gained him an unfair advantage resulting in him being handed a 5 second penalty.

Douglass had been put through a “merry-go-round” of emotions, forced to work his way past his main rivals before watching it seemingly all slip away to Marsh near the end, then being informed he was the winner after all. Truthfully, it had been his to lose, his speed had been his greatest weapon and with others fading he had profited and come out on top.

Blake Ticehurst now leads the overall Clay Pigeon Kart Club Championship by 16 points despite not crossing the finish line first, while Arun Phull should not be too harsh on himself for what happened at the start of the final he responded emphatically to recover lost points and is now sitting in second just ahead of Ewan Charman.

Blake Ticehurst, Coles Racing: “I was really pleased with how the race meeting went as it is only my second meeting in a Minimax after 4yrs in Honda Cadet. The racing was really close and exciting and Clay is an awesome track that I have always loved racing at.”

“Mixed grids are always great fun and overtaking 32 karts in my 3 heats was enough to put me P3 on the grid for the final. The final was again really close and to get a 1,2,3 for Coles racing was amazing, although I want to do better than 3rd next time!.”

David Phull, Xcel Motorsport: “I don’t know what to say really – Arun was so on it all weekend and to end up 2nd for the final only to be put onto the grass on the first lap and the recover to finish 7th. Is a tough end result after such good heats”

Charman may not have been on the podium but did a good job, he did not do anything which he should not be doing, he improved lap by lap and with a long season ahead appears to be on the right track at the moment to finishing near the top of the table.

Mark Ticehurst: “To come away with a new lap record and leading the club championship is really special for me and I can’t wait to get back to Clay for the Wessex and British Championship meetings in May. Thanks to all of the organisers and marshals at Clay for a great weekend”