Graham beats Neave to take his first win of the season 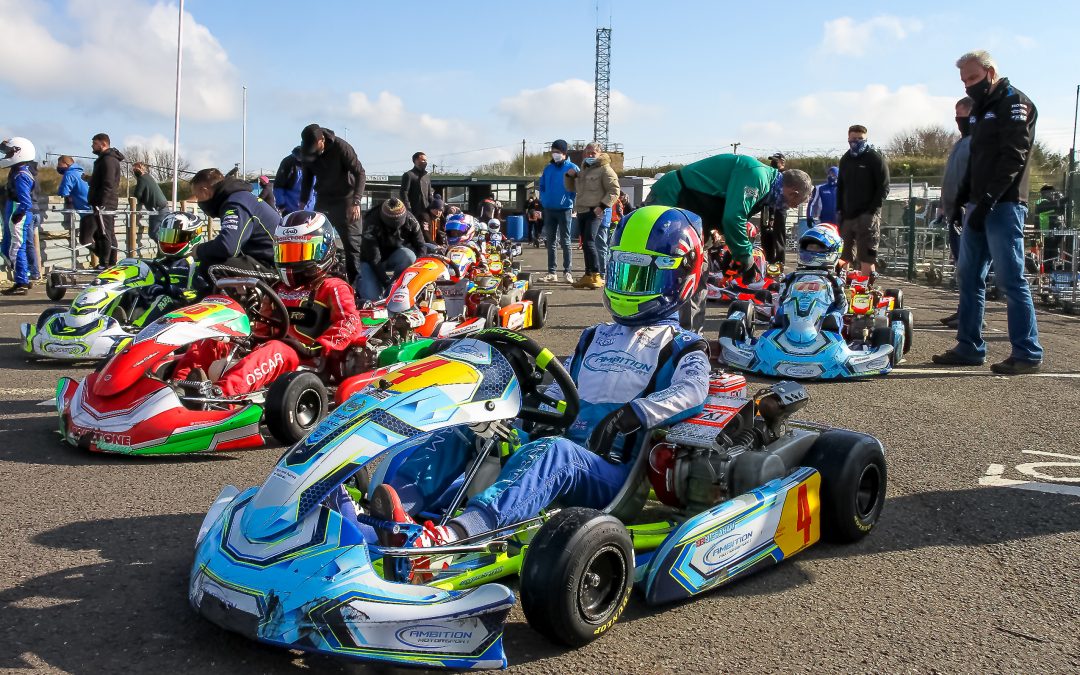 Graham dominated from the front row after passing Lewis Island on the first lap. After that Graham was rarely put under pressure, quite simply the whole paddock was left stunned by his pace on wet weather tyres where he was in a league of his own. Showing great awareness of the conditions he simply out drove his rivals and put in a dominant display.

It seemed nothing was going to deny him the Wessex Championship and following victory in Saturday’s events, Sunday was to produce more of the same. Throw in the unpredictable weather that is found at Clay Raceway and the weekend had offered up but consider this his race display in the third heat during the second day of racing he made his overall performance even more astonishing.

Owne Neave looked like he was due a good result all weekend, starting off Sunday’s final in seventh, running well in the race and putting in a late race charge passing Synergy Fluro team Ambition Motorsport Kenzo Craigie for third before being promoted to second following Max Cuthbert post-race penalty.

Not only did Cuthbert suffer a late disappointment in the Sunday Final but he never really got going on the day where other teams managed to find that bit extra, Synergy Racing Development struggled in the ever-changing conditions and Cuthbert seemed to find his challenge going all wrong. It was a weekend full of promise but sadly ended in disappointment. 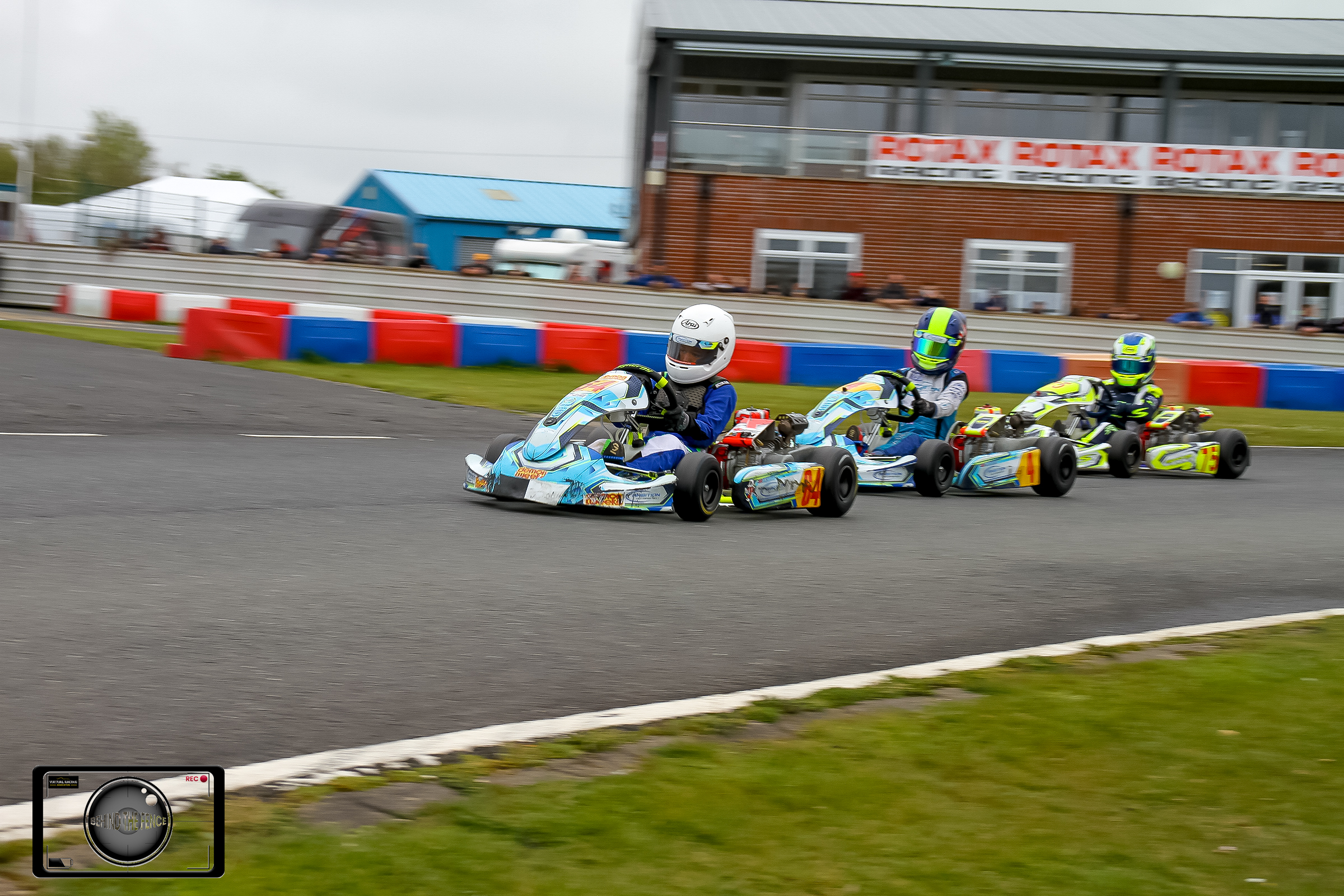 Sundays opening first heat produced a thriller, right from the start Kenzo Craigie was forced to hold off a determined Joshua Graham who was pushed equally hard by Thomas-minh Spearing and Aras Majauskis. It was a tense four-way race that witnessed a race long battle that was more like a fast-paced game of chess as each driver looked to find the break needed to outperform the other.

The racing was that close that Graham was able to storm from 17th to second holding back Spearing who briefly led for Synergy Racing Development only to swap back the lead of the race with Craigie on the final lap, with the leading pair crossing the line by just 0.07 of each other and the top five separated by half a second.

Timon Jungling had made easy work of the second heat taking the lead early on from Kai Clarke and never looking back, Eva Morris dropped all the way back to ninth gifting third to Owen Neave.

A full course yellow came into effect on lap 2 following an accident that ended Travis Rose’s race. On the restart Owen Neave took his chance and passed Clarke for second, his chances of challenging Jungling then faded on lap 7 as Kenzo Craigie, Oscar Tumilty and Max Cuthbert all found their way pass him on the Pit Straight in quick succession.

By lap 10 Jungling’s early charge had him opening up a gap of 3 seconds over Craigie to clinch a deserved win, while Craigie held off a late challenge by Tumilty in the final lap repassing for second on the exit of Top Bend. As they crossed the line, they were only 0.08 apart.

Heat 3 was an otherwise dominant display by Joshua Graham dominating the field by over 5 seconds on his way to victory, he was so far ahead at one point that most turned their attention to the battle between Noah Barham, William Murphy and Thomas-minh Spearing.

The trio swapped positions regularly enough that few had noticed Charlie Warren who made it to second only to drop away rapidly as the close racing continued, it was a disappointment for Warren had the race pace of those around him and had he been able to pull away he could have possibly challenged for the podium. 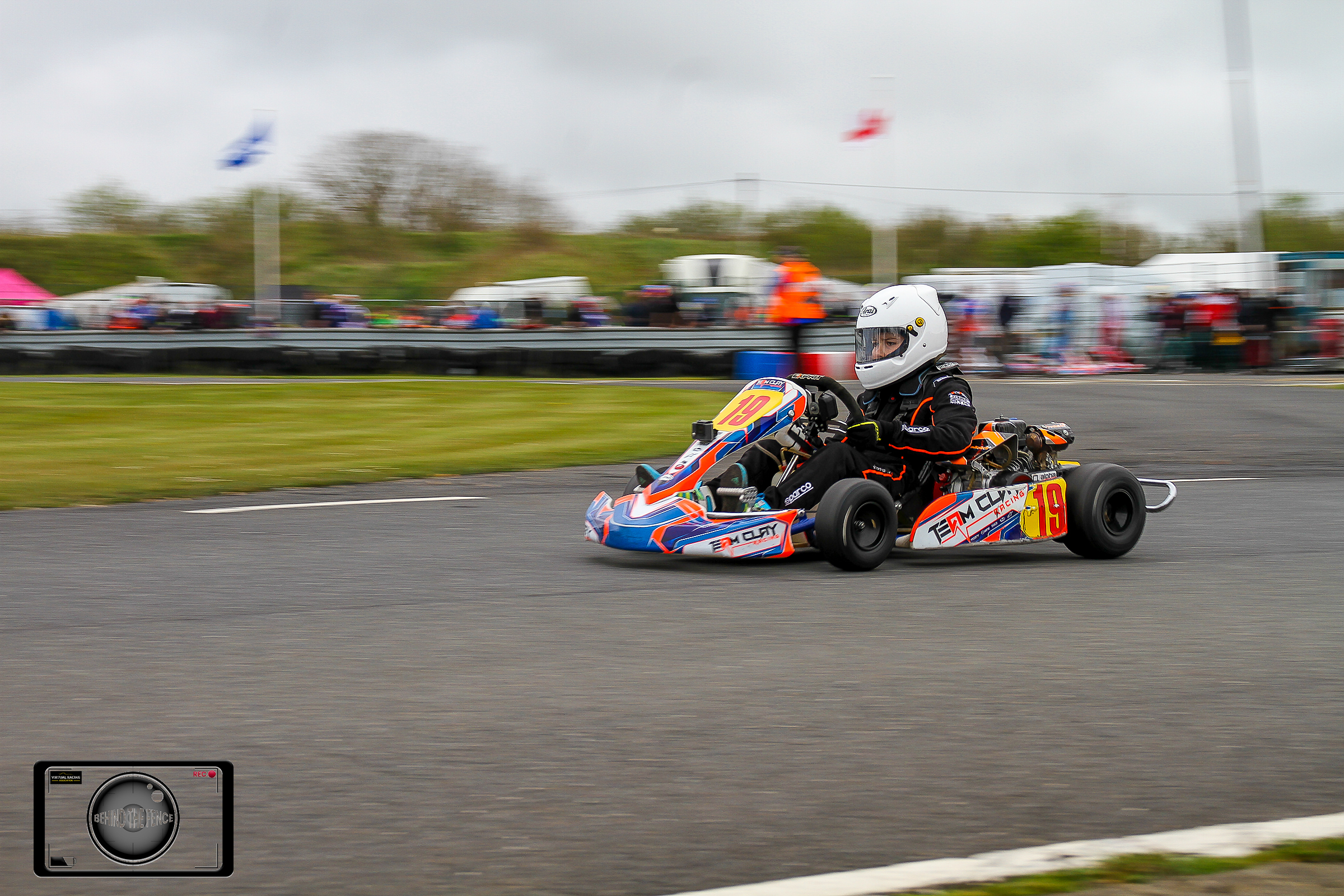 If there was a case for surprise of the day Lewis Island produced it in Heat 4, starting ninth he made his way up to forth and was following Timon Jungling closely. Max Cuthbert had taken the early lead ahead of William Murphy. As Jungling passed Murphy at Hann’s Hairpin on lap 8 Islands followed him through at the Horseshoe making quick work of Murphy, as the group headed into Billy’s Blind Jungling made his move and dived up the inside of Cuthbert.

This toeing and throwing gave Island the opportunity to pass both of them on the exit of Button’s securing the lead on lap 9, Jungling did his best to challenge Island in the final lap’s matching the fastest lap but narrowly just losing out at the chequered flag.

A mistake by Leon Hastie out of the Esses gave Lewis Island the run he needed to take the lead under braking for Hann’s Hairpin taking back-to-back heat victories in heat 5. The early running order left little to separate the top seven, it would be Oscar Tumilty who took the advantage of the close racing in order to pass Hastie for second on lap 5.

Tumilty then began to pile the pressure on Island in a tight scrap for the lead that would last right up to the chequered flag but could find no way past giving Island a deserved win, while Hastie would hold on to third from Elliott Potter. 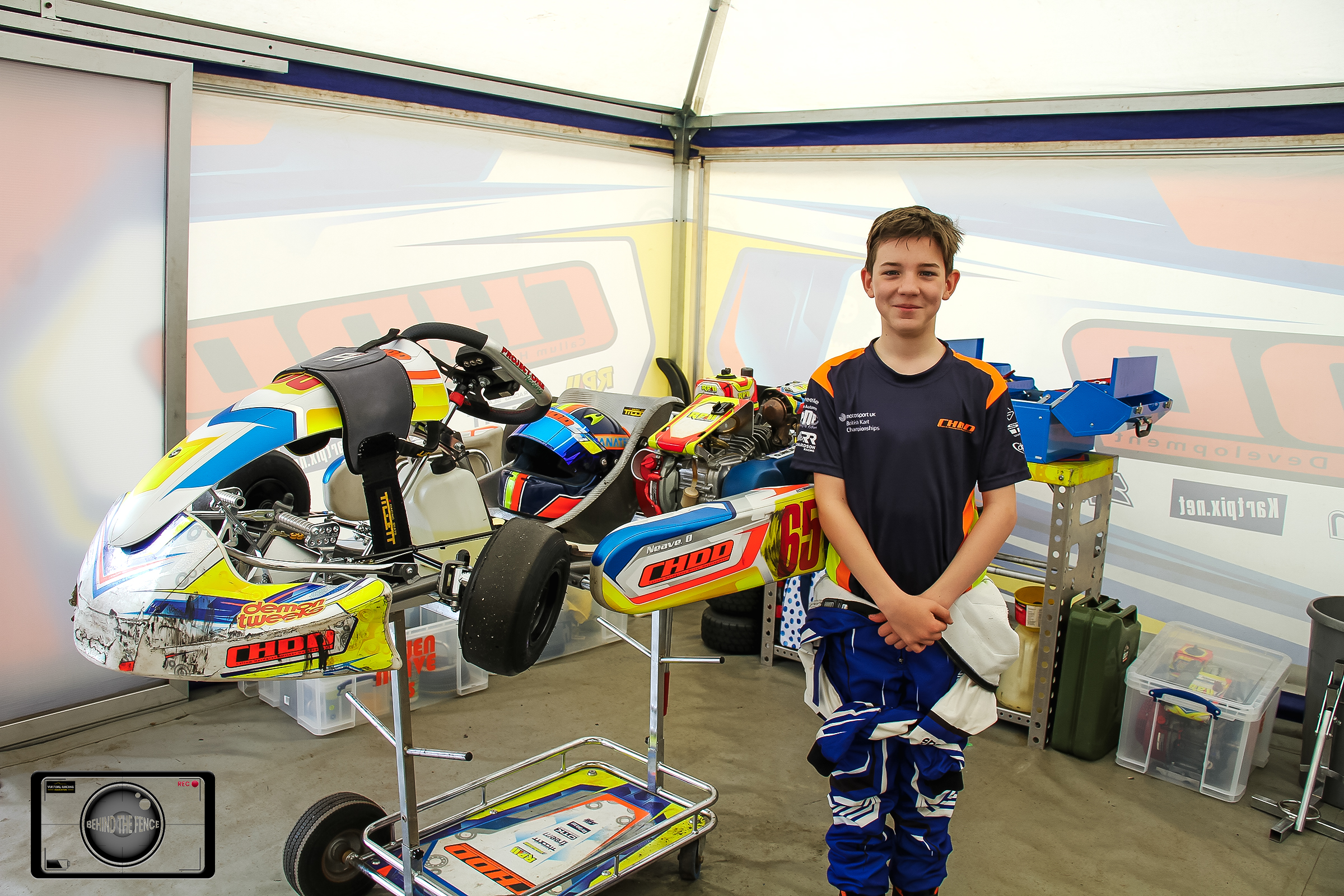 The Cadet final on Sunday was no exception, a damp start forced many drivers to take it easy into Billy’s Blind as the unpredictable weather continued to play havoc for the drivers, teams, and the kart setups. It was not the case for Graham, his pass on Lewis Island at the end of lap 1 along the Pit Straight was well executed coming out of Button’s he had the run and charged past for the lead.

Further back Noah Barham lost two spots at the same corner to Max Cuthbert and Owen Neave, meanwhile Aras Majauskis stunning drive from 20th on the grid would not go completely unnoticed, a good start had allowed him to move up seven places in the opening two laps, and he began to put pressure on Clark for 12th allowing Timon Jungling to close in on a possible top 10 place.

Max Cuthbert began to make moves early on but it was Craigie who took advantage first, passing Island at Button’s to move up into second, Cuthbert then passed Island for third at Hann’s Hairpin. A lap later Neave made full use of his run out of the Esses to line up Island and pass him for fourth, in just two laps Island who had started on Pole had gone down to fifth.

Graham had managed to pull clear of the pack despite less-than-optimal track conditions to start with, Majauskis was now up to eighth and setting the fastest lap of anyone. This was then seventh when a move between Synergy Racing Development teammates Oscar Tumilty and Thomas-minh Spearing did not quite work out dropping Spearing down two places.

Cuthbert finally got the pass done for second on lap 9 sliding down the inside of Craigie at Billy’s Blind, with a gap of nearly 2 seconds to Graham any chance of the win was already gone.

For Craigie things started to unravel as Neave dived up the inside on lap 11 for third, with the ever-impressive Majuaskis now all over, briefly passing him on the penultimate lap for forth.

Despite losing a little bit of speed to Max Cuthbert towards the end, the result was never really in doubt Graham controlled the race brilliantly and while having Kenzo Craigie on the podium alongside would have topped off a memorable weekend for Synergy Fluro team Ambition Motorsport. 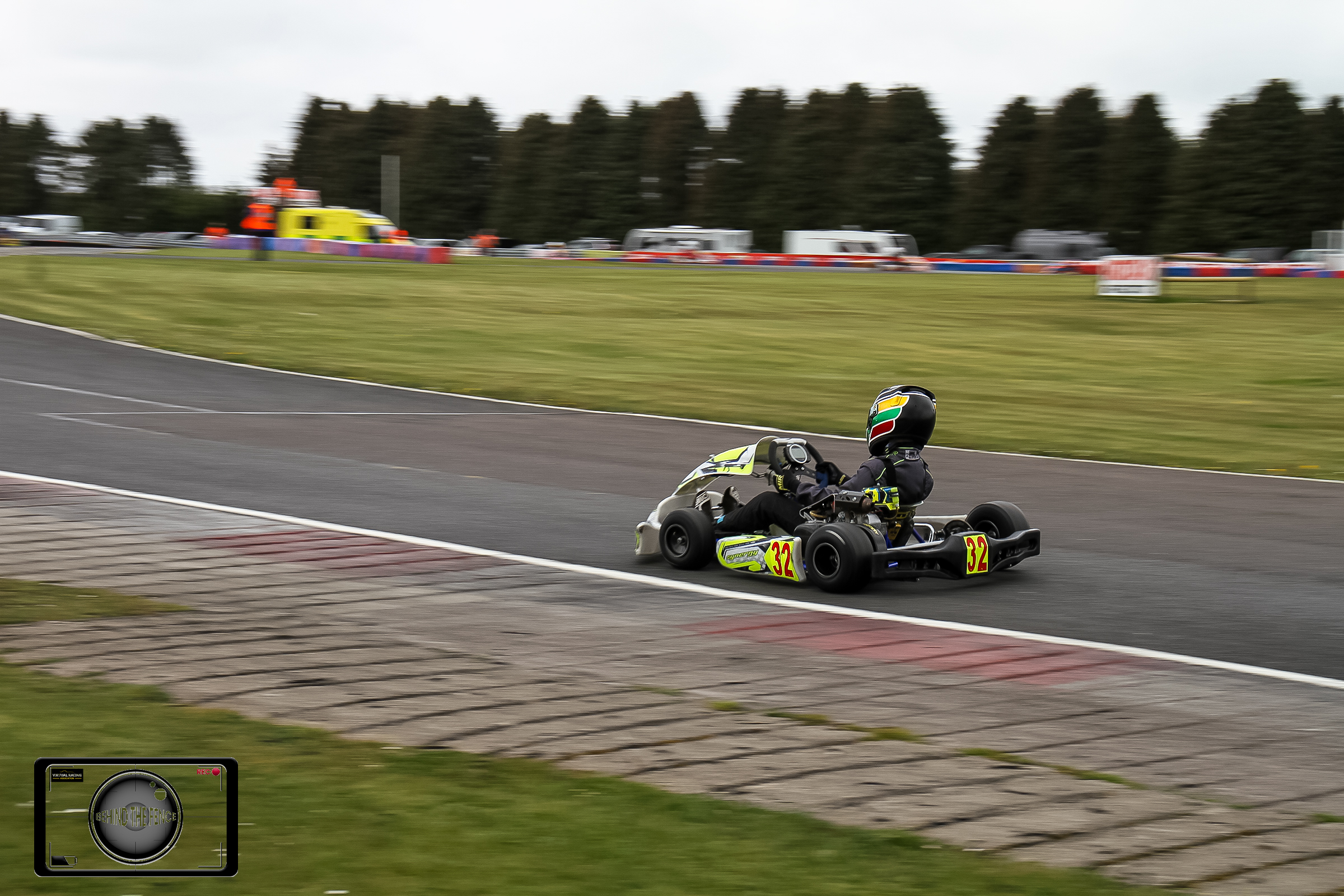 Cuthbert looked like celebrating for Synergy Racing Development camp. But that soon disappeared when he was handed a post-race penalty for an incorrectly positioned front fairing this handed him a 5 second penalty slipping him all the way down to eighth, snuffing out any chance that Cuthbert would be joining Graham and Neave on the podium after such a dramatic and exciting race.

Tumilty, Majauskis and Cuthbert had the fastest karts of the field over the whole final, the three were inseparable over the heats and took the fight to Graham all weekend.

Graham showed what he is made of and that he is in an elite driver now having won the Wessex championship, there should be no shortage of teams looking at him during this season Wera British Karting Championship and quite possibly a few of them may soon be looking at him with a view of running in the FIA Karting scene in the near future.

Joshua Graham, Ambition Motorsport: “I’m really happy to have come away from the weekend, not only wining both the finals, but also to have been awarded the WC plate.”

“It’s been hard work, and also great practice for the British Championships”

Trevor Graham, Dad/Mechanic Ambition Motorsport: “It was a great effort by Joshua and all at Ambition Motorsport to have lifted the WC plate.  The weather conditions proved challenging all weekend, but it was also good to get in some much needed at racing.”

For Clay Pigeon Raceway regulars Jarrett Clark and Jack West, may not have featured very much in the outright battle for the Wessex Championship, they both had their attention firmly on the Honda Cadet title with Clay Pigeon Kart Club in their minds. Both scored well during the meeting and are now sitting top of the points table separated by just 2pts.

Max Endacott drove brilliantly to score an impressive 161pts at only the second race meeting of the season second only to Clark on the day, while Freddie Baker rounded off another solid weekends racing putting him firmly in the hunt for the title alongside Noah Pikes and Harrison Whitcombe. 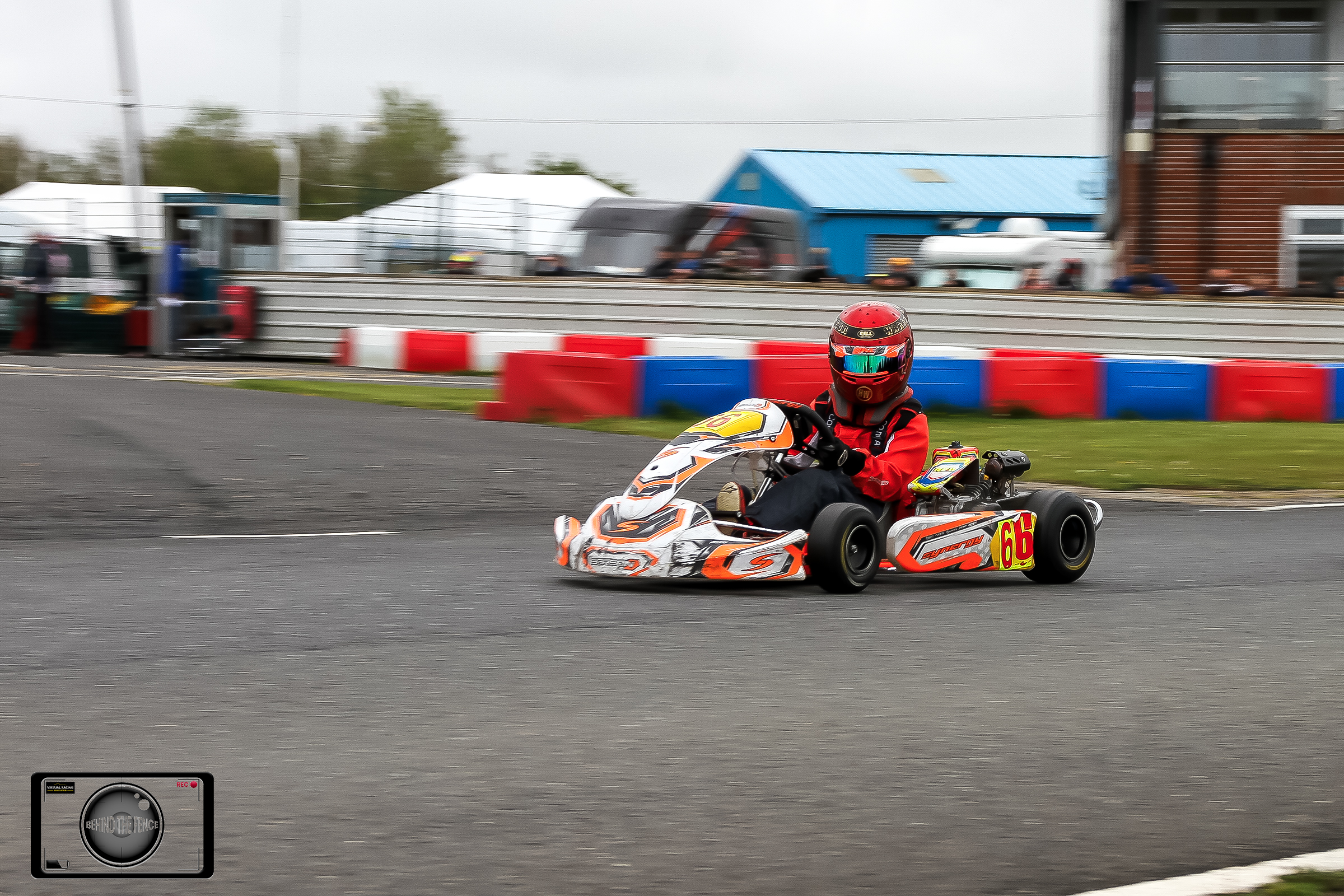