On The Apex: Why 30 karts on slicks and rain don’t mix… 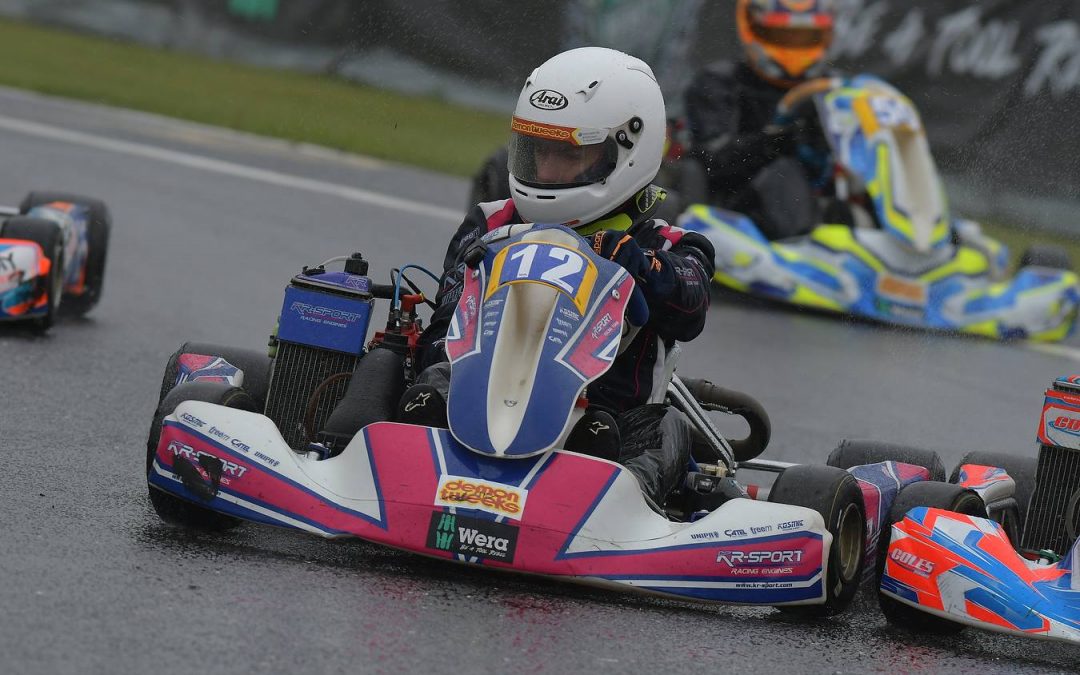 The most prestigious karting championship in the UK as well as the most competitive. The British Karting Championship is the place to be to prove your talent. Well most of the time anyway…

After another successful day testing on Friday, I was genuinely looking forward to the weekend’s  endeavours. KR-Sport was in full force this weekend with the entire awning filled out as we got ready for the event’s activities. However before the actual driving could began, there were some media obligations to perform.

Now all the drivers are a extremely competitive bunch so pretty much everything we do turns into a competition. So as the Senior’s were called up to have their photo’s taken, I was determined to win my first unofficial race of the 2021 BKC.

Deciding that running wasn’t necessary, I walked at a brisk pace towards the club house where Alpha Live were positioned and arrived to get my picture taken first. Granted, there are no result sheets or trophies handed out but it was still a dominant victory to kick the season off.

Quickly brushing aside my latest triumph, we completed the rest of the wet weather practice sessions to prepare for qualifying. In the dry.

Even though we didn’t have much dry running over the two days, we were still confident that my experience from Clay Pigeon would compensate. Our slight set up gamble wasn’t ideal however we still put our purple racing machine on P8 on the grid.

So I lined up in my grid slot for heat 1, feeling slightly out of place. But this is the British Karting Championship and anything can happen. This was proven when my start went completely to plan with me jumping up to P7 at the first corner. But then chaos broke out as another driver ran onto the kerb exciting the Esses.

I went left, I went right but to no avail, I just couldn’t find a way through. Literally meters later however, one of my teammates launched down the inside of both me and the two drivers ahead. All three of them ran wide and I sailed serenely up into P5.

I quickly dropped the chasing trio and closed in on the top 4. Now we’re not talking about seconds or tenths of a second but hundreds between our lap times so precision and consistency are the name of the game. And as it was, I caught the driver in 4th place, no other than the reigning British Junior Max champion.

Now probably the sensible thing to do would be to work with him and take my time to overtake. Did I do that?  Uh, no.

I threw the kart down the the moment the opportunity presented itself, I could feel the kart sliding underneath me but I had to hold on. I simply had to get past him. The time this took was no more than about 5 seconds but it felt like hours in the kart, but finally the revs picked up and I drove out of the corner with no comeback from the other driver. I was up to 4th and closing on leaders.

And then the race ended…..Nonetheless it was a good performance and had I had a slightly stronger qualifying session, who knows what might of happened…

As the sun began to shine majestically on to the twists and turns of the Clay Pigeon karting circuit, I was wondering what would happen in my second heat. As I lined up on the grid I was still thinking about the question at hand.

Similarly to the first heat, I would line up from 8th on the grid but this time I kept my position going into the first corner. Slowly but surely I worked my way through the field to be in P5 by the middle of the race. However one driver behind me had other ideas and took a late lunge going into the Esses but I had nowhere to go…

It seemed that my luck had run out with me being hurled violently off the circuit. And if that wasn’t enough, after re-joining the circuit from the grass, another competitor made a less than subtle manoeuvre to prevent me from overtaking him at the hairpin. After being launched on to two wheels and once again on to the grass, I re-joined, in 14th and with a bent steering column to boot.

Still not all was lost, we still had the pre-final and the main final to go. The clouds looked threatening but we knew Clay and could see that this was just regular cloud cover. So we stayed on slicks as we went to the dummy grid.

Of course it started raining with the majority of the grid on slicks and no amount of pleading to the officials would allow us to put wets on. It wasn’t a question of if there would be a red flag but when and most importantly who? Well, me as it would turn out.

After 6 minutes of the being lapped by the drivers on wets and slick shodded karts scattering the world over, I was shoved by one of the karts on wets.

So it was Hamera exit stage left, as I was cannoned towards the barriers at what felt like the speed of light. And then everything went dark…

As I came around, I was surrounded by medical personnel and tyres. The kart clearly had hit with some force but currently the medics were more concerned about my condition and less interested in giving me a full debrief of my race ending crash. It was actually some time before the red flag was shown which surprised many people as my accident looked rather bad. The race carried on for about 5 laps while I was in the barriers.

After being given the all clear by the medics, I was still feeling battered and bruised but ready to take on the final from last place but after another horrific crash, in Juniors this time, the meeting was abandoned. Ah but what about the points, how would that be decided? The officials would take your starting position for the final (last in my case) and count that as your finishing position. So two last places for me which doesn’t sound very fair…